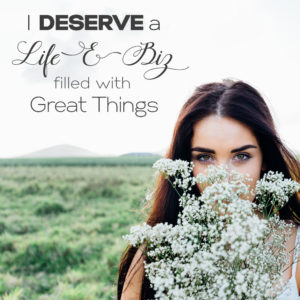 Your mind is like a soundtrack. It constantly plays thoughts as you go through your day. You might have thought things like, “I’m too stupid to do this. My podcast is going to flop. I can’t write compelling copy like other online business owners. I’m not successful enough to attend a seminar.”

But don’t think you have to give into these thoughts. Your thoughts are under your control. When you take the time to understand how self-limiting beliefs develop, you can gain insight and learn how to change your mental soundtrack.

Self-limiting beliefs can stem from unkind remarks from other people. It may have been the teacher that told you that you were a terrible writer, the verbally abusive parent who called you worthless as a child, or a friend who envies your life.

Many people make the mistake of believing that what they’re told about themselves is true. They don’t examine the belief when the words are said. This can cause you to carry around statements about your abilities that simply aren’t true.

Self-Doubt Can Lead to Self-Limiting Beliefs

Everyone is insecure and doubts their own abilities at some point in their life. Maybe you weren’t picked to work on a web design project you really wanted, so you assumed that your designs were terrible. Maybe you applied to be a speaker at an upcoming conference and weren’t chosen.

During times of self-doubt, it’s important to remember that other people’s decisions are not a reflection of you. There are many reasons you may have missed out on the opportunity to work on a project or speak at a seminar that have nothing to do with you. Maybe you weren’t meant to work on that project because a better project is waiting for you. Maybe you weren’t chosen to speak because you would have been in an auto accident when you were traveling.

Your Perception of Others Can Cause Self-Limiting Beliefs

Imagine this: you’re at a networking event. You spot another small business owner in the crowd and you walk toward them. Before you can reach them, they turn away.  You assume they don’t want to talk to you. You might think things like, “I’m a boring conversationalist. No one’s interested in me. Maybe they can tell I don’t belong.”

Your perception of this person keeps you from reaching out. So you stick to talking only with people you already know and you miss out on the chance to build some great professional relationships.

Learning how to change your mental soundtrack is essential if you want to reach the next level in your business. When you hear self-limiting beliefs, take a moment to consider if they’re really true or if they’re simply lies that you’ve accepted as truth.

Learn how to end self-limiting beliefs when you download your bonus workbook.