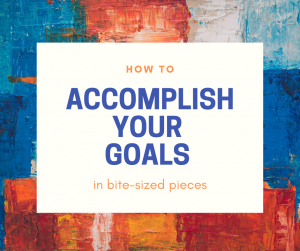 One of the reasons people struggle with reaching their goals is because they aren’t bite-sized.

They try to make too many changes at once. They either take on more than one goal at a time, or they make those goals way too large.

Either of these approaches tend to lead to failure.

An example of too many goals at once might be someone choosing to quit smoking, go on a diet, exercise regularly, build a successful business, and get out of debt.

All of these are good goals that can be done. But if you try to do them all at once, you will probably find it to be too much and quit.

This is one of the reasons why resolutions rarely work out.

Instead, focus on one or two of these for at least 1 to 2 months and make them a new habit first. Don’t tackle any new goals until the first goal(s) is second nature.

For example, take quitting smoking, you might start with that one since it has the most negative impact both on health and finances.

Set that as your goal. Spend a couple of months getting rid of the cigarettes and using aids like the nicotine patch to help.

Then once you have completely quit smoking and no longer need the patch, you can move on to the next goal or goals on your list.

Goals That Are Too Large

You may find changing your diet and exercising more to be really overwhelming goals because they are huge ones.

So, another tactic to help you with discipline is to break them down into smaller goals.

Instead of just quitting overeating, maybe you break it down into this week you cut your soda intake in half, then week two you cut it out completely.

If you do this week by week making one SMALL change, you may find it easier to stay in control.

From a business standpoint, you might want to start blogging.

It feels overwhelming at first because there are so many things to think about.

So break it down:

Break Them Down By Intensity

Another way you can break it down is by intensity.

So let’s say you want to exercise more, but you haven’t exercised in years.

If you start with something like a full workout, you may give up or get injured and then be unable to exercise at all.

So instead of going full tilt, you can start by doing mini workouts at a lower intensity for a few days, and over time add more minutes to your workout until you reach at least 20 to 30 minutes of activity.

You can also gradually increase the intensity of your workout as you get stronger and in better shape.

Back to the blogging example, writing daily like so many people tell you to do, can be too intense. Write weekly instead.

I find that if I write less often than weekly is hard to schedule and it’s hard to motivate myself. Discipline is much easier when I’m consistent.

Break Them Down Into Bite-Sized Steps

By breaking down the goals into bite-sized steps, you can make it easier to develop the discipline you need to accomplish them.

You will also improve the chances of success in changing your habits.

Are You Ready to Start Looking for An Accountability Partner?
Discipline is Empowering
What's Your New Normal? Take Control