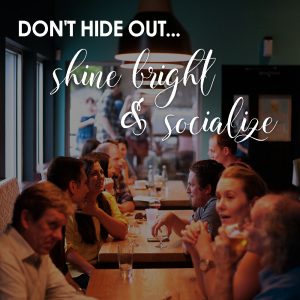 If you’re an introvert, you may find networking in person uncomfortable. To grow your business and reach the next level of success, you’ll have to network at some point. But that doesn’t mean you have to drop everything and attend the biggest conferences in your niche right now.

You wouldn’t try to learn how to swim in the middle of the ocean, would you? No, you’d start in a smaller environment, like a community pool. If you’re afraid of the water, you may even start by simply putting your feet in a wading pool. It’s the same concept with networking in person. Start with a small pool and it won’t seem as scary.

Make plans for your meals

Making a plan to eat a meal with other attendees in advance is one way to slowly wade into the networking waters. Before the event or on the first day, make lunch or dinner plans for the rest of the event, prioritizing the people you really want to have a personal chat with.

These meals don’t have to include a lot of people. If you’re happiest at dinner with two or three other people, make that happen. You don’t have to accept invites to big group meals if the thought makes you uncomfortable.

Don’t hide in your hotel room

Socializing with other attendees is an important part of networking events. If you don’t know anyone, it can be tempting to hide out in your hotel room. But don’t be a hermit. At the end of the day, invite one or two people to join you for a glass of wine or a snack. This gives you some uninterrupted time to really connect with other attendees.

Ask for what you want

Don’t be shy if there’s someone at your networking event that you’d like to get to know. Introduce yourself and ask if they have time later to meet up. If the other person agrees, don’t stop there.

Now, you want to nail down the specifics. Try to arrange a meeting in a quiet place where you can both talk. For example, you might say, “I’m excited you want to meet up. Do you think we could get together tomorrow afternoon about three in the lobby?”
If you don’t get down to the specifics, you and the other attendee won’t make the meeting. You’ll go home wishing that you had taken the time to connect, even if it was only for a few minutes.

Don’t let the thought of networking intimidate you. Just focus on dipping your toes in the water for now. Later when you’re ready, you can try bigger pools and eventually, you’ll find yourself swimming in the ocean.